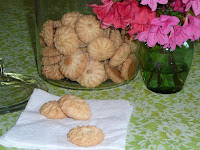 Last evening I finished sewing 2 sleeper sacks for my twin grandsons and baked them baby cookies!! Boxed them up for grandpa to take to UPS this morning. 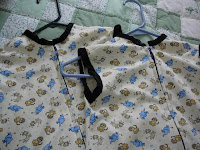 I first saw this recipe in Controlling Your Fat Tooth by Joseph C. Piscatella.  It is a terrific cookie with only 3 ingredients.  It can be dropped by teaspoons or pushed through a cookie press.  It is a delicately crisp on the outside and moist and chewy on the inside cookie.  I don't have to worry about additives with these sweet treats.

Here is the recipe:

Weekends cooking project was with my 14 year old granddaughter who after viewing the movie "JULIE and JULIA" asked me to show her how to make the traditional French dish, Boeuf Bourguignon (Beef Stewed in Red Wine). She and her 10 year old sister sat and made a menu everyone especially the two of them would enjoy.
Sunday dinner menu: Beef Bourguignon
Buttered boiled potatoes
Salad Bar with lettuce, broccoli, peppers, carrots, celery, tomato, hard
cooked eggs and assorted dressings
Hot buttered and toasted French bread
AND
Brownie Sunday's with ice cream, hot fudge, and whipped cream.

My son arrived shortly after noon on Sunday dropping my older Granddaughter as he was on the way to a ball practice with the younger.

We started with Em, that is what I call her, cutting with a kitchen shears about 7-8 strips of bacon in 1" x 1/4", lardons . She cut them into a small sauce pan and covered them with cold water which she placed on the stove and brought to a simmer for about 10 minutes.

While those were going she used paper towels to dry off the 2"x 2" pieces of rump roast I had pre-cut and stored in the refrigerator for her arrival. The purpose of this is to decrease splatter and increase browning when we are ready for that step.

10 minutes having passed she poured the water and bacon through a large sieve that I held over the sink. She patted the bacon dry and tossed them into a large dutch oven. I use cast iron cookware for this but a large glass casserole with a lid would be just a good and easier for a youngster to handle if alone.

Em was in the groove now!! In no time she had browned the bacon and removed it to another dish. There were plenty of dripping to brown the beef in but had that not been the case I would have added olive or canola oil to the pan. Em added the first 6 chunks of beef and turned them with tongs until the were beautifully browned on all sides. She removed them to a platter and carried on ( as Julia would have said) until all of the beef was perfect!!

Grandpa arrived on the scene just in time to open a bottle of Fetzer Merlot, one of my favorite red wines and also what I had on hand.....Em added 3 cups of the wine to the dutch oven and returned the beef to the pot. Then she added 1 can condensed with enough water added to make 2 cups beef broth to her mixture.

I showed her how to lay out a clove of garlic on the counter and with the flat side of the chef's knife pressed down really hard to pop it. The papery skin fell right off so she quickly repeated the process til she had 3 cloves of garlic. At the cutting board the garlic was assembled like 3 little plump berries lined up to give up their flavor to our dish!! With the chef's knife I showed Em how to hold the tip of the blade down with her fingers, keeping the fingers up, not curled down, and with the other hand rock the blade back and forth across the garlic to chop it. She mastered this in no time flat. I AM SURE SHE IS BRILLIANT!!

Em added the bacon, garlic, a bay leaf, a few pinches of salt, black pepper, about 1/2 t. thyme, and 1 T. tomato paste to the mix and stirred it all together. She turned up the fire on the stove and brought it to a simmer. She had preheated the oven to 350 degrees earlier so it was ready when she covered the dutch oven and moved it into the oven to simmer and stew for 2 1/2 to 3 hours.

I set the timer for 2 1/2 hours knowing the house was soon to fill with the wonderful aroma of Em's dish and I would not be able to stand not to peek for more than the minimum time!!

Em sauteed the mushrooms in butter with salt and pepper then set them aside. She added the onions to the emptied pan and added water to barely cover then simmered them until they were tender. Just turn the pan off and let them sit til you need them later.

We went ahead and peeled our potatoes and made the salad set up. We arranged the brownies on a cake pedestal with cover and set them on the table.

There was still a light green lace tablecloth on the dining room table room Easter Sunday which made the room very springlike. Em happily proceeded out back where the lilacs, Virginia bluebells, and Azaleas are all blooming as well as many other little flowers and the red bud and dogwood trees. I sat on the patio and relished her being here with me, the blooms, and the succulent smell descending from the second story kitchen window to the patio below where I sat in a white rocking chair just enjoying the day. She returned with a billowing handful of freshly picked flowers and we returned to the kitchen for water and a vase.

Five bells! Take out the beef!! Heat the oven to 450 degrees. Turn on the potatoes and slice the bread, butter it and lay it out on a half sheet pan. As the final prep continued we open the dutch oven and it was just p-e-r-f-e-c-t......tender, aromatic!

Time for the final step. She added in the mushrooms and onions to the beef mixture. Em combined 3T. soft butter with about 3 T. flour in a medium bowl. It didn't work well for her with a spoon but when she mixed with her fingers it went together perfectly. She added about 1/2 c. of the hot broth mixture from the beef to the flour and butter and stirred until it all melted together into a creamy velvety concoction you knew was magic. She poured this into the main dish and turned up the stove to thicken the wine and beef laden juices.

We drained and buttered the potatoes and poured them into a white ironstone dish. The beef took it's rightful place on a large platter painted with red roses. The salad was set up in individual glass dishes on a lazy Susan and the bread joined on another platter along with the bouquet of lovely flowers and the brownies.

DINNER IS SERVED.
And it was delicious.